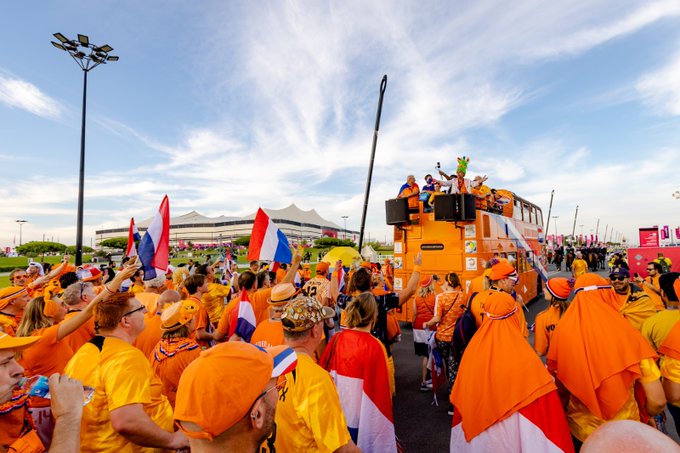 
For those who must have studied flags and are into international football, it may come as a puzzle at one point to figure out that the Netherlands national team wears orange and does not represent its national colors of red, white, and blue on their sports kits as opposed to other national teams in international tournaments.

Despite orange not appearing on the nation’s flag, the Netherlands national team have carried on the tradition of donning an orange jersey.

Few teams are as well-known on the world stage as the Netherlands. They have dazzled the world with an incredible kind of football since 1905.

The team led Group A after a 1-1 draw with Ecuador and a 3-1 victory against Senegal for Louis van Gaal’s team, who are presently playing in Qatar for the World Cup.

With two goals in two games, Cody Gakpo is one of the tournament’s most impressive players.

They will try to win the World Cup for the eleventh time and advance to the final four.

They are dressed for this competition in a “laser orange” effort that seems more yellow in the Doha sunlight.

Although the Netherlands’ national flag is red, white, and blue, it felt rather odd to see the team uniformly in orange. It would be like having Nigeria’s Super Eagles wear blue or even yellow as their official colors when they play.

So here is why actually.

The title “Prince of Orange” is regarded favorably in the nation. Not every sports team wears orange, though.

Hockey and rugby teams from the Netherlands also go by the nickname “Oranje,” as does its football squad.

The group has been referred to as the “Clockwork Orange” in national media.

With a win versus Qatar on Tuesday, the Netherlands would finish first in Group A with seven points. Since van Gaal returned for a third time as manager in 2021, they have gone unbeaten in 17 games.

He told reporters: “I agree with the criticism but we are unbeaten for 17 matches and I think if you look at the goal difference too we deserve some respect.”

Tobe Nwigwe Hopes To Collaborate With Stonebwoy, Kwesi Arthur, Burna Boy And Others