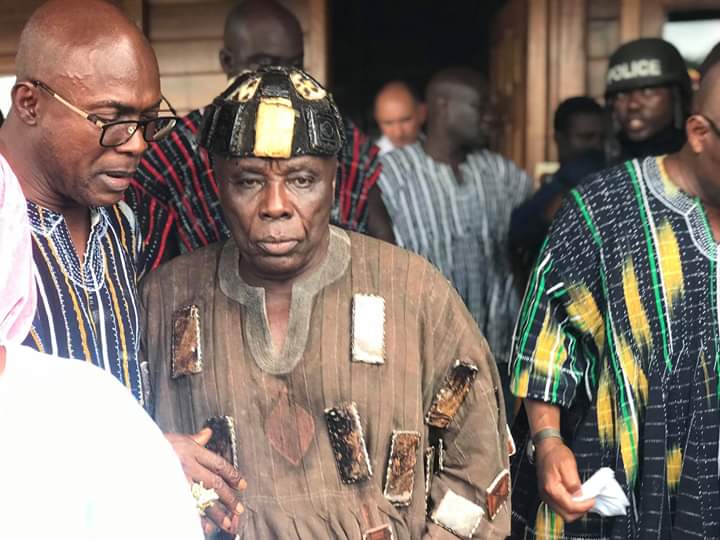 This was after some residents in the community calling itself Concerned Citizens of Asamang Tamfoe petitioned the Akyem Abuakwa judicial council on November 9,2022 accusing the chief of engaging in illegal mining polluting rivers, and degrading farmlands threatening food security and livelihood of small holder farmers.

The petition was submitted weeks after some illegal miners in Asamang Tamfoe clashed with Okyeman Environmental Taskforce on anti-galamsey operation in the community leading to exchange of gunshots on the streets.

Subsequently, the Benkumhene held a press conference on October 6,2022 calling the bluff of Okyeman Environmental taskforce led by Chief of Akyem Apapam, Osabarima Apagya Ofori IV and dared to violently clash with them should they return to the community.

Acting on the petition, the Akyem Abuakwa Judicial Council summoned the Chief of Asamang-Tamfoe Osabarima Kwame Koh II and the Benkumhene Nana Boakye Darkwa to appear before it on 21st November, 2022 for hearing which they complied.

During the court proceedings, the Benkumhene of Asamang-Tamfoe Nana Boakye Darkwa was asked by the Akyem Abuakwa judicial council that on whose authority did he act to organize the press conference on 6th October, 2022 since the Chief of Asamang-Tamfoe Osabarima Kwame Koh II was in Kumasi on the said date.

Secondly, he was confronted with a daily graphic’s publication which he threatened the Okyeman Environmental Taskforce.

The Benkumhene admitted guilt and lied prostrate to apologize to Okyenhene and Akyem Abuakwa traditional council.

“I order that the Benkumhene should not remain as the Benkumhene because he has defied the orders that I instructed the taskforce to protect the Akyem lands from all illegal mining activities”.

“The destruction of lands and water bodies going on at Asamang-Tamfoe, are you happy ? You did something wrong and Okyenhene called you and you refused to come, because of galamsey all our water bodies are destroyed in even Kyebi here, the same as Tamfoe, I am not interested in mining , I hate it” Okyenhene fumed.

Secretary of Concerned Citizens of Asamang-Tamfoe , Ernest Osae Botah expressed his satisfaction with the decision made by the Akyem Abuakwa Judicial Council led by the Okyenhene and was hopeful that their concerns will be addressed after the substantive case is heard next week to end illegal mining in the community.

In the substantive case, the petitioners allege that Osabarima Kwame Koh II ,the Benkumhene and his sub chiefs have all been engaging in illegal mining using foreigners under the guise of community mining.

“People of Foreign descent have been allowed and in conjunction with chief of the town and sub-chiefs are dangerously engaging in illegal mining so close to the only portable source of good drinking water-the Tamfoe river . In face ,some of the mining sites almost end within the river bed causing so much discomfort and damages to the residents”.

“It is rumoured that the chief Nana Kwame Koh II ,himself is part of the illegal miners and indeed on 19 October 2022, 5 excavators were sized under an operation mounted by over 25 soldiers and carried away.One of the excavators is alleged to belong to the chief”.Portions of the petition stated.

The petitioners want Okyenhene to call the chief and other accomplices to order to stop mining activities in the community.

“Whilst we make this appeal for the intervention of Ofori Panin Fie ,we are ready to join hands to look at other means by which this menace can be thwarted legally”.

The petitioners also implicated some political figures in the illegal mining activities.

“We have tried to defend and occasionally defended the allegation that ,the Member of Parliament for Atiwa East Abena Osei Asare and deputy Minister of Finance ,the District Chief Executive, Mr.Kwabena Panin Nkansah ,the immediate past constituency Chairman Mr.Albert Antwi, with support of the Regional Executives of the NPP in Koforidua are behind this illegal act”.

Nat’l Cathedral: Truth, Justice shall not be buried – Ablakwa as he instructs his lawyers to respond to suit

Rap Culture In Accra Is Dead, Only Alive When I Arrive- Pappy Kojo