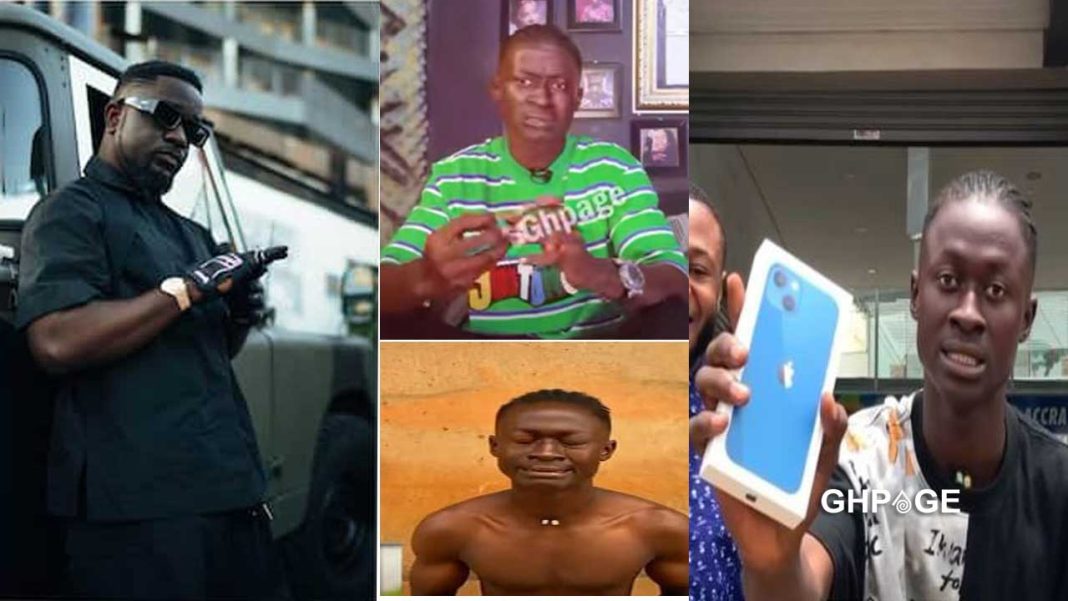 Oboy CJ is full of joy following a kind gesture done to him by King of GH rap, The Highest Sarkodie after he begged the rapper for a mobile phone.

The comedian who prides himself as the Number One Music Promoter days ago on Ghpage TV in an interview with ever-beautiful Akosua Kaakyire burst into uncontrollable tears amid begging Sarkodie for a favour.

He pleaded with the award-winning rapper to gift him with an iPhone to aid him to do more videos for the gram to also as he has been doing promote other musicians’ songs through his style of promotion.

Oboy CJ in the interview appealed to the general public to help him get the message to Sarkodie so he could see him and grant his wishes. Considerable Ghanaians pitied CJ and shared his videos across social media.

The socialite in the interview also recounted how Sarkodie has played a vital role in making him popular and supporting his craft as a comic music promoter. He disclosed that the rapper was the first to follow him on Instagram and Twitter.

After days of his interview with GHpage TV, Sarkodie saw the video and responded via a tweet. King Sark in the tweet tasked his manager, Angel Town, to get CJ the phone he asked for.

Rapper Sarkodie has finally fulfilled his promise as he has bought a brand new phone for Oboy CJ. In the video sighted online, Angel Town took Oboy CJ to a phone shop and bought him the phone.

The phone was presented to Oboy CJ by Sarkodie’s manager Angel Town in a video which has just surfaced and is in fast circulation on social media a few hours ago.

In the video, the comedian was heard expressing his gratitude to Sarkodie for honouring his plea. He took the opportunity and pleaded with Shatta Wale and Okesse 1 to present their own as he had mentioned them in the earlier video.

Watch the Video below

Stonebwoy brags about his expensive outfit, chains and shades

Sack Agric Minister, He Has Run Out Of Ideas – Kofi Akpaloo To Akufo-Addo

SPINALL, Summer Walker, DJ Snake, And Äyanna Come Together For New Video “Power (Remember Who You Are)”

Dancehall Star Vybz Kartel To Be Released From Jail – Report