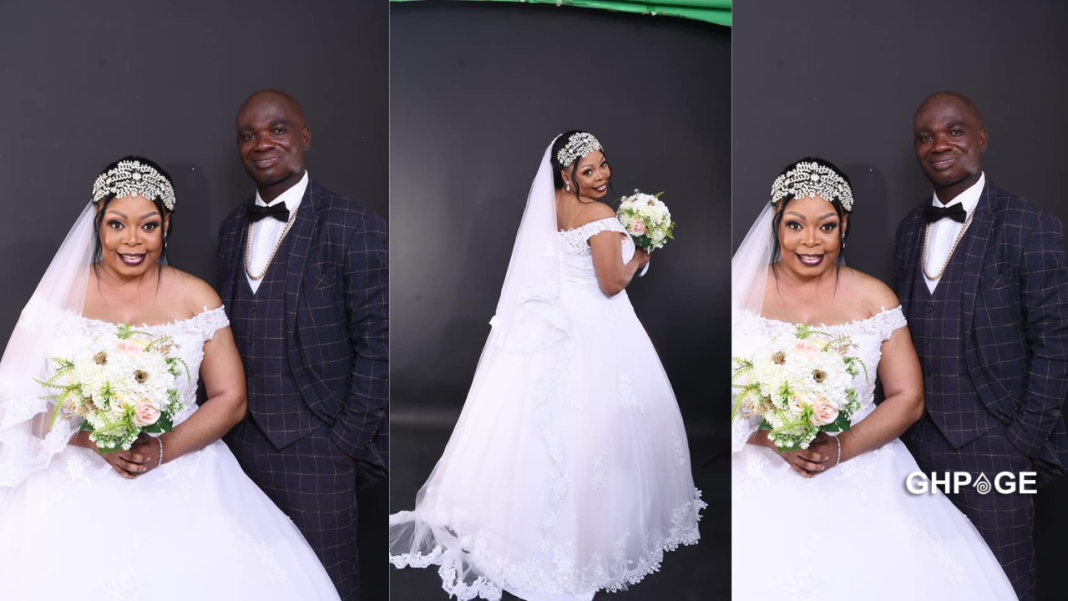 The photos that have since garnered massive attention shared on social media show Joyce Dzidzor Mensah dressed in a beautiful bridal gown with a veil and crown on her head.

In the first two photos, Dzidzor stood alone showing her front and back in different poses. The remaining photos had her in loved-up poses with Dr UN who rocked a fine suit.

After the photos went viral on the internet, a lot of Ghanaians dismissed the marriage reports and rather suggested that it was just a photoshoot session to promote a yet-to-be-premiered project.

Hence the two are only playing with the mids of Ghanaians and shouldn’t be taken seriously.

Amidst the insinuation that the marriage between Dr UN and Joyce is fake, the former HIV/AIDS ambassador has spoken and according to her, she has genuinely wedded Dr UN.

Speaking in a video, she strongly claimed that Dr UN is her husband and the secret wedding came off last Wednesday evening.

She also pleaded with her fans to give her some time to rest because she’s more than tired after the ‘controversial’ wedding ceremony.

It’s very hard to trust the words of both Joyce and DR UN because they are both known attention whores and serial clout chasers.

Prior to Joyce’s ‘wedding’ to Dr UN, she was in a romantic affair with Ohene David who later dumped her for reasons which are yet to be known.

Blogger Kwame Motion has earned an appointment at PizzamanChickenman

If You Can Do Better Than Otto Addo, Apply to Coach the Black Stars – Mixed Reactions As Abeiku Santana Disrespects Black Stars Coach...

How To Bet On ATP Tennis: Top Tips To Win