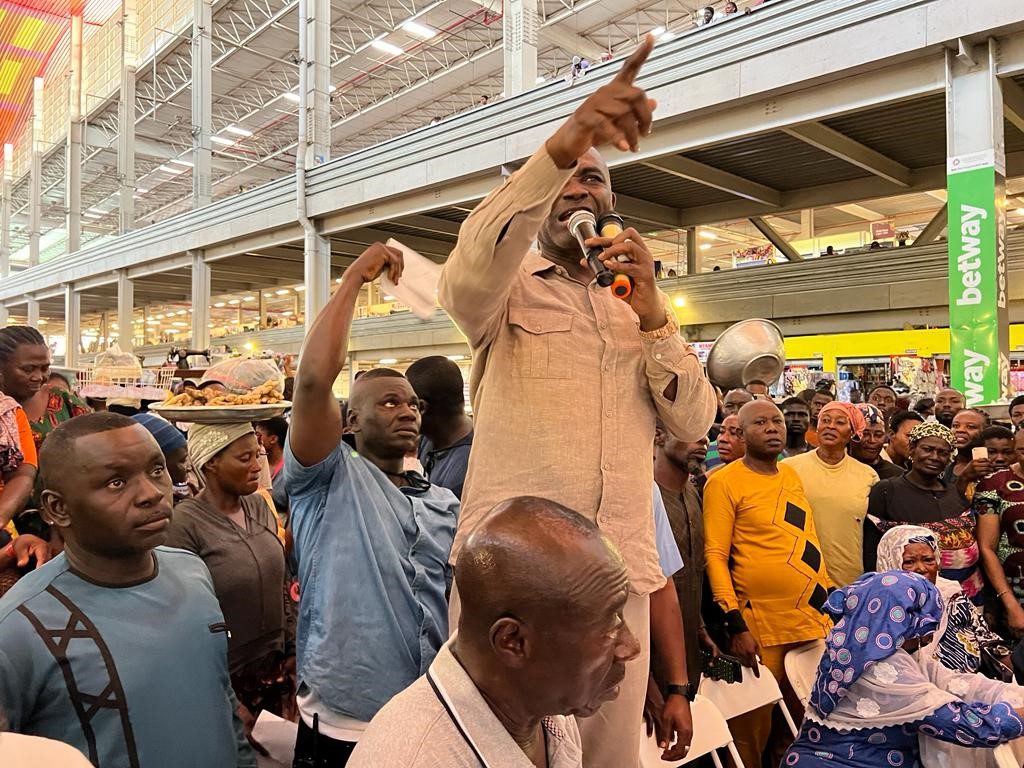 
The Member of Parliament for Assin Central, Kennedy Ohene Agyapong, has promised to transform the country’s economic fortunes when given the opportunity to lead as president after the 2024 elections.

The seasoned lawmaker, who is currently criss-crossing the country to rally grassroot support ahead of the race for the flagbearership of the New Patriotic Party (NPP), said he would leverage his experience as a business mogul to position the country as a business hub.

After taking his mobilisation drive to some regions, the legislator took his engagement with delegates to the Ashanti Region last Friday, amid massive reception from the people.

It was an electrifying atmosphere at the business enclave as the crowd chanted NPP slogans and songs to welcome Mr Agyapong and his entourage.

As part of the engagement, Mr Agyapong earlier on met the market queens at the Kumasi Cultural Centre, from where he walked through the race course to Kejetia to see for himself the concerns raised by the queen mothers.

Among the challenges that were highlighted by the market queens were that there was only one meter for the whole Kejetia market and the absence of lighting systems at the race course.

Speaking to the teeming crowd, the Assin Central MP said apart from courting the support of Asanteman for the NPP flagbearership, he was also there to learn at first hand the challenges confronting the people for redress.

The legislator promised to give 200 bulbs to fixed dysfunctional street lights in the area and also work on the metering system for the people to discharge their business activities.
Mr Agyapong expressed appreciation to market women for the warm reception accorded him and promised to find solutions to challenges they faced.

He observed that he would help to promote women entrepreneurship because females played a vital role in the country’s socioeconomic development.

“The activities of market women, who most of the times are the breadwinner, cannot be underestimated. My focus will be on these individuals whose collective contributions make the local hubs and trade centres the culture powerhouse they have become famous for,” he said.

Mr Agyapong further assured the people that he would assist the market women to work with appropriate authorities to help design workable pension schemes for them.

He further stressed that when he was given the opportunity to lead the country, his government would find a lasting solution to the nagging problem of foreigners who were deeply involved in retail business against the country’s laws.

He noted that such a development was unacceptable as as it posed unfair competition to the local businesses and market women.

The MP also said more attention would be given to the informal sector of the economy because that was where a greater percentage of economic activities revolved.

He said the informal sector, where women mostly engaged in, was the anchor to the agriculture, manufacturing and services sectors of the economy.

“The vital role that women play as farm owners, farm partners and farm labourers is astounding: their contribution is estimated to account for around 70 to 80 per cent of food consumed in the country,” he said.

Mr Agyapong also said women played a crucial role in the education sector as they had become increasingly responsible for the education and other material needs of their wards, especially in female-headed households.

The Assin Central MP also told the traders that under his leadership, Ghana would be a business destination.

He said industrialisation would be prioritised as it held the key to economic transformation, adding that “his job creation agenda would be focused on massive industrial drive and tourism”.

“I have plans to create globally competitive industries, make commercial farming attractive like what pertains in Cote D’Ivoire, Tanzania and other industrial countries. Ghana is well endowed with minerals, and would be used to turn the economic fortunes of the country around,” he added.

Mr Agyapong observed that as a mogul business and employer of over 7000 workers across the globe, he would capitalise on his business prowess to help achieve the development targets of the country.

“I will focus on business development. I have the experience to create jobs for the youth with my record of business life. My steel company when completed will employ over 1,000 workers. It is named after Ashanti – ‘ASHANTI STEEL’. I will run Ghana like a business, and unprecedented transformation will take place,” he stressed.

The MP also said he had plans to promote large scale mechanised agriculture, starting with Afram plains, when given the nod to lead NPP to win the 2024 general elections.

Touting himself as a disciplined leader, he gave the assurance that he would instill discipline, integrity, hard work and accountability in Ghanaians, especially the youth to contribute effectively to national development.

On his educational prospects, he said he would use his salary to establish a scholarship scheme in every constituency.

“I will not take and enjoy my salary. It will be channeled as a scholarship to pay the fees of the poor, and I believe it will promote Ghana’s development in more ways than one,” he stated.
Touching on chieftaincy, Mr Agyapong pledged to promote the participation of chiefs in national governance, adding “I will rely on the wise counsel and wisdom of the traditional rulers in his administration”.

Ghana represents at 2023 Soundcity MVP Awards with Black Sherif, KiDi, Camidoh and others

NPP Executives in Western Region poised to break the eight

Sprayground And KA-1 Team Up To Bring An Edgy Vibe To U.A.E. With Fashion Show Hosted At The Iconic Fame Park In Dubai