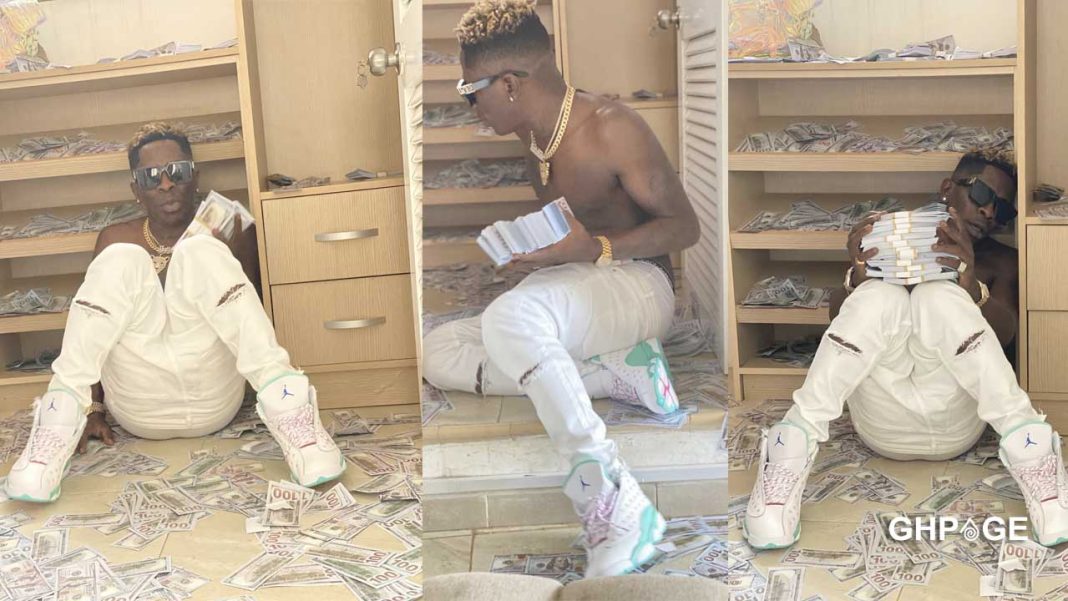 Earlier yesterday, the boss of SHATTA MOVEMENT – Charles Nii Armah Mensah aka Shatta Wale issued a stern warning to his critics on the internet ahead of the official premiere of his GOG album.

The photos he attached to the warning captured the musician flaunting bundles of dollars and others scattered on the floor.

As we all know, Shatta Wale likes to show off his wealth hence this didn’t come as a surprise at all.

“October rain. Get ready for some singles on the #GOGALBUM2022
Pls and pls and pls. I am not doing this album for Ghana music industry .I am doing this as my Job to fill the souls and minds of the masses with peace and love .. I don’t want negative discussion about my album on any platform(Warning)????? I didn’t come here to join unions ,I came with mine and that’s “SHATTA MOVEMENT”.

These pictures were shared just hours after the end of the Global Citizens Festival concert which he was left out of the artists who were billed to perform.

Both Sarkodie and Stonebwoy raised high the flag of Ghana with their superb performance but King Shatta was missing in action because he was not given an invite.

According to some social media users, Shatta Wale is pained that he was not contacted to perform reason he has gone bananas on the internet with his needless warning and fake dollars.

Some critics of Shatta have condemned his actions and according to him, he’s only pressuring the youths to engage in illegal activities to accumulate wealth because he’s more than matured to show off fake dollar notes on the internet.

Below are some of the popular comments gathered under the pictures;

Hamid Infinity – If this is what u have to do to prove your richness, then you’re still poor

Aniefiok Emmanuel – Wat is he working for if he has all this , beside i see it as fake , just for video shooting

Quo Jo – “shatta wale with dollar notes” is no news. man should outgrow this lifestyle!

Bobrisky Sends A Message To His Future Husband