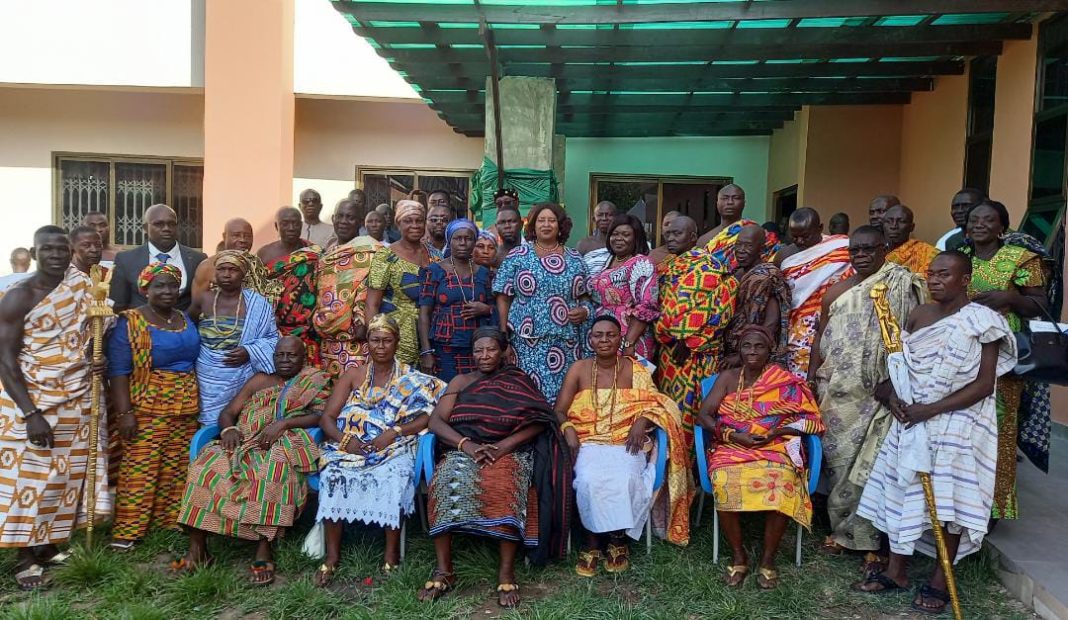 
Madam Millicent Kabuki Carboo, Biakoye District Chief Executive (DCE), says the district has made remarkable progress in all sectors through the goodwill and support from traditional leaders and other stakeholders.

She said although there might be challenges, it was important for the people of the district to be united even in their diversity of thoughts and ideological standpoint.

They should continue to support stakeholders to achieve a lot together and promote peace and justice.

Madam Carboo, addressing a durbar of chiefs and people of the district at Worawora on the theme: “Accounting to the people; The hallmark of good governance”, said the forum was in line with Article 42 of the Local Governance Act, (Act 936 of 2016) as amended by Act 940.

“The District Assembly shall facilitate the establishment of a structure for stakeholder participation that may include town hall meetings and other avenues for participation of the people.”

She said the Kwamekrom slaughterhouse was renovated, and the Meat Shop fitted with a deep freezer to ensure residents consume healthy animal products and boost the local patronage of hygienic meat products from within butchers in the district to promote the local economy.

Madam Carboo said the Assembly liaised with the Ghana Enterprises Agency (GEA) to create a Business Advisory Centre which was fully operationalised to boost trade and commerce, especially among residents and indigenes and to also provide skills training and information within the local economy.

She said there was also the renovation and construction of an additional shed at the Abotoase market to provide traders with a more conducive environment for their activities to improve revenue mobilisation.

Madam Carboo said the Assembly acquired a 10-acre land at Bumbula to be developed into a state-of-the-art events and recreational centre for events such as weddings and conferences.

She said under Planting for Food and Jobs (PFJ), 603 bags (25kg) of inorganic fertilizer, 600 bags organic fertilizer and 445kg of hybrid seed maize were sold to farmers at subsidized prices in 2022 while 987 farmers, belonging to 15 Farmer-Based Organisations were trained on food hygiene, improving nutrition at household levels and creation of fire belts.

She said the Assembly distributed furniture to basic schools, encouraged and increased girl child participation in Information, Communication and Technology (ICT) education, especially among girls at the basic levels, through a training session in Cyber security supported by GIFEC and Assembly.

She said there were health screening, behavioural change communication, counselling and testing, breast cancer screening, health walk and donation of streetlight bulbs to the Worawora Hospital to improve visibility at night.

Madam Carboo said with the help of the District Security Council, the district continued to enjoy peace and urged the traditional leaders to amicably solve pockets of chieftaincy disputes in some communities.

She said the district was endowed with rich cultural diversity with several tourist attractions, including Konklobi Island at Adzamansu, water cascades and caves at Bowiri Aboabo and Beach front at Odormitor, which could be developed.

Madam Carboo noted that availability of lake water for irrigation farming and aquaculture and over sixteen potential tourist attraction sites were opportunities, adding that there was a need for creation of District Council of Chiefs to give the district higher power to influence policy formulation.

Mr Eric Yankson, Oti Regional Internal Auditor, on behalf of the Regional Minister, said the district offered an opportunity for the establishment of agro-industries and key agricultural activities, including crop farming and livestock rearing, fish farming and agro-forestry.

He said strengthening the citizens claim for effective local governance and service delivery was critical to ensure the overall sustainability of decentralization in Ghana as well as to ensure that as more powers and resource were being decentralized, managers of resources at the local level were held accountable for the use of the resource.

Okogyeaman Asiedu Koram II, Omanhene, Apesokubi Traditional Area, commended the DCE for developmental projects so far under her tenure and pledged the support of the traditional authorities.

Sprayground And KA-1 Team Up To Bring An Edgy Vibe To U.A.E. With Fashion Show Hosted At The Iconic Fame Park In Dubai