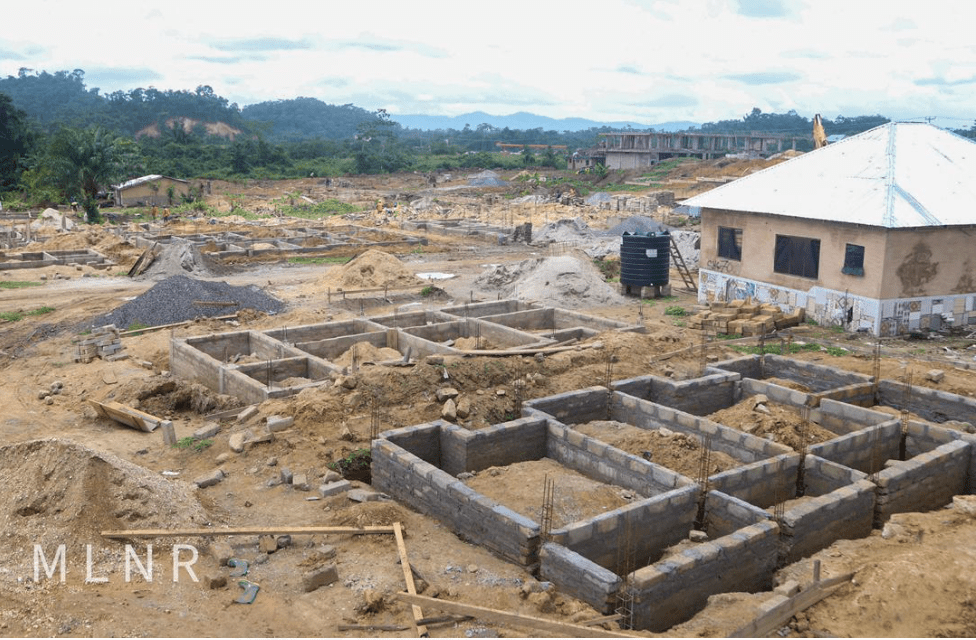 
Government’s commitment to rebuild Appiatse, a town in the Western Region razed by fire is on course as the Reconstruction of 124 housing units is steadily progressing with a total of 6 contractors on site.

Addressing the media on Thursday, 22nd September, 2022 during his visit to the reconstruction site, Mr Benito Owusu-Bio, the Deputy Minister responsible for Lands and Forestry and Chairman of the Appiatse Reconstruction Implementation Team (ARIT) gave a brief on the progress made disclosing that the first phase of the construction will require about 45 million Ghana Cedis to complete and the second phase, 80 million will be needed to complete the.. phase, taking into consideration the slightly affected houses which will only need roofing and other petty renovations.

He continued saying ” Where we are now is the construction stage, particularly the first phase and as you can see here, most of the contractors are working on the substructures which are made of normal blocks, others at the foundation level, some footings level and soon we will be at the flowing level with brick works to hopefully commence in 5weeks time”

He said the compressed earth bricks which will soon be used for the top structure of the buildings is in line with government’s idea of an Eco-friendly, sustainable and green community which will be a model concept for other rural communities.

Hon. Benito also told the media that the partnering government agencies have been helpful so far as the Electricity Company of Ghana has provided the site with a transformer, Getfund has also signed an agreement to build the school for the community among others.

He however called on other government agencies who are yet to join the fray to as a matter of urgency come on baord, beckoning the Roads and Highways Ministry to commence the road networks, to clear the road corridors for contractors work freely.

Hon. Benito on his tour of the site also engaged the Brick making engineer from the Rural Housing Department, Mr. Castro Kaliebu, who disclosed that a total of 4000 bricks have so far been produced, adding that with machines of a producing capacity of 11,000 a day, they are hopeful to finish production even before the stipulated time provided they get the required electrical power to support thier work.

He assured Ghanains and the people of Appiatse that the team will continue to visit the site and keep tabs on contractors to ensure the structures they are put up are of a high standard and quality while urging contractors to speed up work.

With the evidence of work on site Honorable Benito called on Ghanaians and Friends of Ghana to donate more as the ultimate target has not yet been reached. “Work has commenced but we still have a deficit so we are pleading with all Ghanaians and others around Ghana to come and donate to unable us fully restore the lives of the victims of Appiatse”

The Chairman in his address commented on a petition from the victims of Appiatse which he said demanded compensation and the structural integrity report. This he noted will be made available to assembly but for compensation he clarified “my sole mandate is to see to the rebuilding of Appiatse, compensation is not in my perview but I’m certain the appropriate authorities will take it up and be rest assured that what we’ve been assigned to do, we will do it to the latter.”

Top Factors To Consider When Choosing An Online Gambling Site